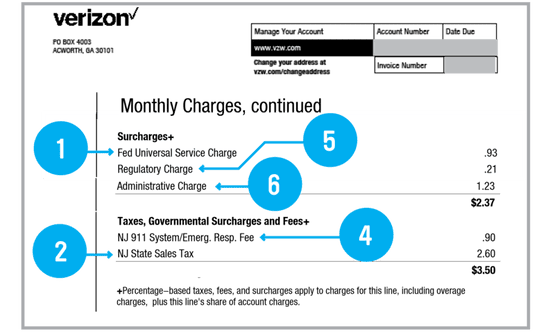 The price for service listed on wireless companies’ website is rarely the one you end up paying at the end of the month.  For starters, there are federally mandated charges, plus state and local taxes — as well as surcharges imposed by the carriers as a way to recover the costs of divvying up the money to the required agencies. In fact, there are over 75 different “fees” your carrier can charge.  The average U.S. wireless customer pays nearly 20% in federal, state and local fees.

These extra charges are on the rise, so let’s take a look at just six of the 75+ fees on your cell phone bill.  While reading, remember you can contact us for a no-charge, independent and expert review of your organization’s cell phone charges.  We’re nice, helpful people looking out for your best interests!

All providers must contribute to the federal Universal Service Fund.  The money is used to help schools, libraries, rural health care providers and telephone companies that operate in high cost areas by giving them discounts on telecommunications services.  While prepaid service providers like Cricket and MetroPCS absorb the cost, the Big Four carriers (AT&T, Sprint, T-Mobile, and Verizon) pass that cost along to you. Wireless customers pay about $5 billion annually in Federal Universal Service Fund surcharges.  The FCC regulates this charge and adjusts the fee quarterly based on the fund’s current balance.

2. State Taxes These taxes are billed to your primary “usage place,” — generally your residence or business address.  However, if you’ve moved out of state and kept your number, check with your carrier to see if they’ve updated your bill.  Sometimes if they don’t upgrade a tax code, you may be getting taxed incorrectly. That could make a difference if you’ve moved to a state with lower taxes.

3. State Telecommunications Excise Surcharge Many states, New York among them, levy specific sales and excise taxes on telecommunications services. Overall, customers in New York state pay an average of 24.36% in federal, state and local taxes on their wireless bills, according to the Tax Foundation. 4. 911/Emergency Response Fees The carriers are authorized (and at times, required) to collect these fees from customers to help local governments pay for emergency services such as fire and rescue. The fees are generally billed as either an amount per telephone access line or a percentage of revenue.

Despite the name, regulatory charges are not government-mandated. Instead, they are surcharges that you get charged to help the carrier defray the costs of federal, state and local regulations.

6. Administrative Charge Administrative charges are similar to the regulatory charges, but more nebulous. They’re generally billed as fees used to cover the costs paid to other carriers when talking to someone on a different network. These fees can (and do) change from time to time.

U.S. lawmakers have proposed bills aimed at curbing some of the excessive fees and surcharges, but the bills have not gotten much traction.

Contact us for a no-charge, independent and expert review of your organization’s cell phone charges.  We have the time and expertise to ensure your organization is being billed accurately and cost efficiently.  Let’s make sure your money is well-spent.